By James McBride   Captivating fictionalized retelling of the famous 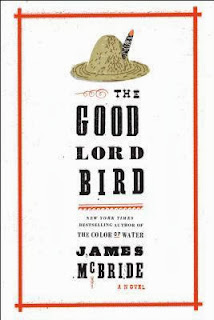 John Brown raid on Harpers Ferry pre- Civil War told through the eyes of a child. Not your ordinary child. "Little Onion" as she is called is a 12 year old slave that finds herself freed and traveling with Old John Brown and his fellow abolitionists through Kansas after her father is killed in a barber shop shootout. But "she" is really a "he" called Henry, a mistake Old John Brown made early on that never found its way to the truth. This group of odd misfits, led by the Old Man and including many of his own grown sons, are searching for the perfect way to do the Lords work by ending slavery once and for all. Old Man avoids capture, bullets by a fraction of a hair and performs hour long sermons in the middle of the battlefield. The main characters in the novel are funny, smart and shockingly likable. The writing is superb and storyline interesting. But fellow readers, my one and only drawback. It is very very long. I felt like it could have had an incredible impact and been about 100 pages shorter to get the same effect. TO PURCHASE JUST CLICK
The Good Lord Bird: A Novel