I Liked My Life 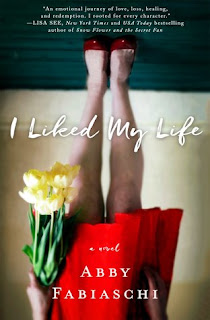 Madeline is the quintessential mother, wife, sister, homemaker and friend. The entire town is shocked when Maddy’s body is found next to the Wellesley library where she volunteered, and the authorities have no choice but to call this a suicide. Her husband Brady and teenage daughter Eve are beyond distraught. They begin down a dangerous path of memories that is filled with every unkind word ever said and every thank you overlooked. In the past, Brady’s job consumed the majority of his waking hours, while Eve, as a popular high school junior, focused on her boyfriend, parties and texting her friends. Now they find themselves struggling to wake in the morning, eating is an effort. Brady starts to drink heavily and Eve completely isolates herself. The sadness is palpable. As the months go by, they reach for each other and share their pain in less destructive ways. Building a new relationship is not easy but with a little ghost (Maddy) whispering gently in their ears, they begin to find their way back to life and back to each other. I cannot say much more without a bunch of spoilers! This is a completely unique, heartfelt, beautiful story about all the intertwined relationships in our lives, many often taken for granted. I thoroughly enjoyed Abby Fabiaschi’s first novel and cannot wait to see what else she has in store for us! Fabulous writing, wonderful characters. Honestly, I could not put this one down! Highly recommend.
Posted by Karen at 5:10 PM 2 comments: 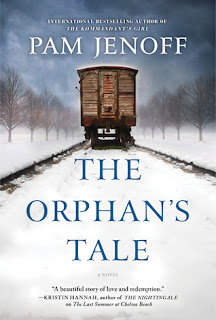 Ingrid grew up in a Jewish German circus family. She had been a star aerialist along with her brothers since a very young age. As her late twenties approached she married a German officer and moved to Berlin leaving her performing life behind. When war became unavoidable, and the fact she was Jewish impossible to hide, her husband Erich sent her away. Finding any of her family proves impossible and Ingrid is embraced by a rival circus family and changes her name to Astrid. One day Noa, a 17 yr old Dutch girl appears near their practice tent. She is scared, cold and holding a small infant she claims is her brother. And so begins a most unexpected friendship as the two very different women form an unbreakable connection so deep, their very lives depend on it. Endlessly trying to help the other - each thinking they don’t need any help at all. At the heart of it, their desire for family, love and acceptance trumps all the brutality and cruelness that the war brings to their lives. I was completely and unexpectedly immersed into this magical story. Astrid, Noa and a beautiful cast of character’s fight for each other and the futures they so desperately dream of. Highly recommend this UNPUTDOWNABLE novel by incredible, author Pam Jenoff. This very original story brought my imagination to life of a circus life I had no idea existed - and new meaning to the childhood tune “fly through the air with the greatest of ease, that daring young man on the flying trapeze.”
Posted by Karen at 11:50 AM No comments:

This Is How It Always Is 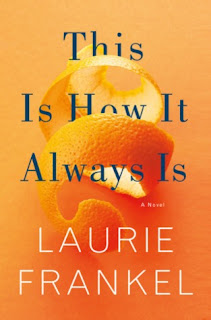 Rosie and Penn are living the dream. Rosie is an ER doc in a busy Washington hospital. Penn manages their sprawling farmhouse and works on his novel while their five beautiful boys are at school. Sounds like the beginning of an afterschool special. And it sort of is – or should be. Claude, their youngest, most precocious, brilliant little boy is starting kindergarten and wants to wear a dress to school. The parents; educated, open minded, and busy raising a bunch of noisy boys - try to be understanding. The dress idea backfires and Claude winds up with a purse as a lunchbox. Teachers and administrators “say” they understand. But do they, really? Very quickly the questions become less straightforward, more complicated and some are just downright unanswerable. Claude wants to wear a pink bikini, grow his hair and take ballet. He wants to be “she” and would like to change his name to Poppy. With a house full of bright, creative children where individuality has always been encouraged, the parents allow this and more. When not everyone in their small town follows suit and a nightmare case in the ER leaves Rosie visibly shaken, the family moves thousands of miles away to begin again. Seattle seems the perfect location. Sadly, Rosie and Penn learn that secrets can’t stay buried forever, and the consequences affect the entire family. Their love has no limits and this is a rollercoaster ride they need to see through to the very end. No amount of medical knowledge (Rosie’s) and googling (Penn’s) can protect the parents from the heartbreak of a child’s tears. As the old saying goes: A parent can only be as happy as their least happy child. I highly recommend this educational, emotional and beautifully written novel by bestselling author Laurie Frankel. Her surprising sense of humor and heartfelt characters will leave you thinking about them long after you turn the final page. This should be read, this should be discussed.
Posted by Karen at 4:56 PM 3 comments: