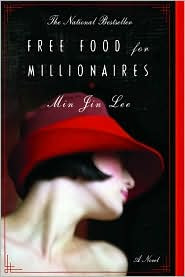 "It's free food for millionaires... In the International Equities Department--that is, Asia, Europe, and Japan Sales--the group you're interviewing for--whichever desk that sells a deal buys lunch for everyone in the department."


Casey Han is a recent grad of Princeton. She's got it all, well almost all. She is beautiful, smart, excellent golfer, funny and feels the world is at her fingertips the one problem being; neither she nor her family has alot of money. She has acquired very expensive tastes throughout her college years and has slid by by her wits, looks and choice of friends but after graduation she finds herself jobless, lacking connections and feels extreme pressure to suceed. Her sister is in medical school and in the small Korean neighborhood she was raised, her parents expect the very best for her future. The best for them is a Korean husband of the right caliber and a solid prestigious career. They are sorely dissapointed in her choices and this story is about those months and years when many overachieving graduates find they don't know what they want to do with their lives. Casey's strong streak of independence puts her at war with both the Korean world her parents live in and her family in general. Although there is a touch of Sex and the City as far as fashion and hip mentions throughout the book, even a bit of truth about post college blues, Casey for the most part is not a likeable character. The writing in this debut novel is good and kept me going but at some point I just hoped it would end sooner than later because frankly, I couldn't stand her whining anymore.
Posted by Karen at 1:05 PM No comments:

If you loved The Last Flight ...