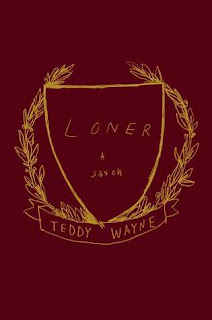 Sometimes I read too many reviews before I dive in. I picked up Loner by Teddy Wayne completely by chance. It was a one dayer and my head is still spinning. David Federman is an awkward freshman at Harvard. Hailing from nowhereville New Jersey, an average looking guy from an average (actually above average but not in his eyes) family. David who was mostly a loner in highschool shocks his entire grade by getting into the most prestigious college. He wants to reinvent himself and LIVE a true young person’s life. He wants to experience things and ditch his virgin status. Starting out with the best of intentions he makes a strong effort in class, easily melds into the nerdy clan of the dining hall and meets Veronica Morgan Wells. She is just as her name sounds and looks like she jumped off the pages of Town & Country. From an elite NYC high school and of course - very beautiful. David begins a mission to befriend her, gain her trust and dreamily imagines them becoming a couple. Veronica barely acknowledges his existence until she needs him. Filled with surprising twists and turns and an original narration as David is telling Veronica the story. I was sucked into this novel with surprising speed. Suspenseful enough that it was unpredictable and twisted enough that the reader cannot easily decide whether to love or hate the characters. This incredibly original twist on a coming of age story debates the merit of higher education, whether you can honestly remake yourself and the most pressing ethical dilemma: can ones seemingly innocent manipulation destroy someone’s life. Highly recommend!
Posted by Karen at 2:28 PM