The Secrets of the Notebook

Eve Haas, the author of this outstanding memoir was raised 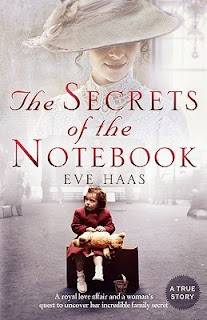 in Berlin, Germany. As a young Jewish German girl Eve had little understanding of how Hitler was affecting her beloved country. But her father knew. Her family were the lucky ones, the Jews that saw things were not getting better, but quickly getting worse, much worse. As difficult as it was to leave the comforts of their home, friends and successful business behind, they moved to London in 1934. A few years later, Eve was presented with a family heirloom. One of the few items her paternal grandmother, Anna, had left the family. The heirloom was a beautiful diary from her mother, Eve's great grandmother, Charlotte. This diary was filled with either a young girls outrageous imagination or a past filled with a life of royalty in Prussia. It was not until many years later that Eve could no longer put aside this deep curiosity and longing to learn more of her family's history and she began a 30 year adventure to find out the truth. This mesmerizing deeply personal memoir is filled with Eve's journey and her passion for history, family and identity. With her supportive husband Ken at her side, they travel back to Germany many times, meet with archivists and historians and slowly peel away the many layers to expose the past as it has never been seen before. Highly recommend this incredible unique true story of Eve's perseverance and dedication to her family - past and present. READ TODAY!! The Secrets of the Notebook: A Woman's Quest to Uncover Her Royal Family Secret