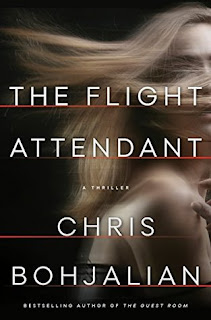 Cassie has been flying the friendly skies since she finished college. It was a way to escape her small Kentucky life, the loss of her parents and guilt of her younger sister being placed in foster care. She is pretty and a flirt, an excellent flight attendant. She is also a functioning alcoholic and as the years have passed the forgotten nights and strange hotel beds aren’t as sexy as they once were. Cassie is on a coveted flight to Dubai, and a very handsome younger man is in her section. On arrival she has dinner with him and ends up back at his hotel. But when she wakes in the morning he is not moving, there is blood everywhere, Cassie remembers nothing. At that moment Cassie has quick decisions to make. Choices that will change the trajectory of her life forever. Who is this man? What will she tell her coworkers? Why was she spared? Much like a spy, like an actress, binge drinkers are great liars because there are always blank spaces and situations that don’t make sense. So begins her parade of stories, one lie leading to the next. She must appease her crew, get rid of the broken bottle, her stained purse and convince her sister she is nothing like their father. The story snowballs. Cassie is front page news. The FBI, the CIA, the Union, her lawyer - all want to know. The deeper the web weaves the less people Cassie can trust. Because in the end - who is really going to believe a drunk anyway? This heart thumping suspense all rolled up into one giant wave of words that keeps crashing on you over and over. Unexpected twists and turns at every corner with a main character you find yourself unexpectedly rooting for. Bestselling author Chris Bohjalian has done it again. You are going to LOVE this one!
Posted by Karen at 7:13 AM