Seven Days of Us 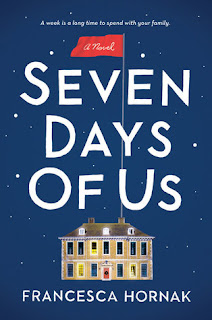 When the Birch family is quarantined for 7 days in the English countryside for the holidays it is anything but a very merry. The eldest sister Olivia, a physician, is coming back from volunteer work in Africa. Because she may have been exposed to the virus, the family has decided to stay in the old crumbling, still beautiful family home far from the city. Father is a cantankerous food writer whose reviews reflect his general world complaints, Mother has just been told the lump she found is cancer and is keeping it a secret until after Christmas and the youngest daughter Phoebe has gotten engaged to her longtime boyfriend (who may like boys more than girls) and is way more concerned with the size of her ring than a deadly disease from her sister. When Olivia’s secret Irish boyfriend (volunteers were not supposed to touch for exactly this reason) collapses minutes after his plane lands she hides their relationship. This witty, fast paced, very British novel was a hoot. Each character is delectably ridiculous and smart in their own entertaining way. Really enjoyed and highly recommend this debut novel. Definitely look forward to more from author Francesca Hornak.
Posted by Karen at 7:47 PM