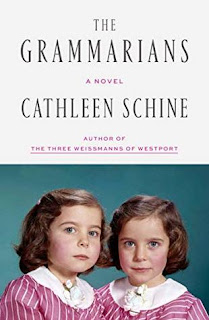 Laurel and Daphne Wolfe are identical twins who are as fierce and feisty as their flaming red hair predicted. Obsessed with words and grammar since childhood these inseparable twins spoke their own treasured language and continuously outwitted the adults in their lives. A fine line between constant amazement and “is there something wrong with them?” - their psychiatrist uncle and loving parents couldn’t quite figure them out. Daphne unsurprisingly creates an eminent column devoting herself to the usage and meaning of Standard English while Laurel becomes a kindergarten teacher and poet. Both living in NYC, the sisters begin to grow apart for the very first time in their lives. Marriage, children and opposing views of destiny slowly unravel this tight-knit relationship. A lifelong battle over ownership of their father’s precious Webster’s dictionary seals their fate. While the ending fell a tad short, logophile (my new favorite word!) and storyteller Cathleen Schine never fails to entertain.