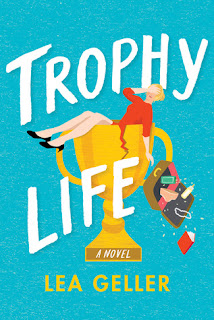 It has been a decade since Agnes survived on peanut butter and scrimped pennies for the rent. Her dreams of living in sunny California all came true the day she unexpectedly met Jack in a bar. With movie star good looks and impeccable taste, Jack, twenty years her senior, became her knight in shining armor and Aggie the epitome of the textbook Trophy Wife. Squeezing in yoga between her manicure and shopping, a house staff to care for her adorable baby - Aggie has more than she ever dared to imagine. The day Jack disappears, this life is over. In one fell swoop (Madoff style) Jack and every bit of their idyllic existence is shattered. Finding herself at the mercy of Jack’s smarmy best friend, Aggie has no choice but to accept a job at a fancy private school in NY teaching middle school English to a bunch of delinquents. Life’s sharpest turn and greatest challenge become Aggie’s salvation. Witty, charming and well written, highly recommend this absolutely hysterical take on finding the life you were meant to live. Pack this one in your beach bag ladies! It’s a winner!!