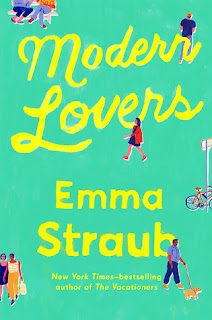 It suddenly was very cool to live in Brooklyn. After finishing Oberlin it would’ve been a dream to live in NYC but their budgets were tight in the eighties. When Zoe’s disco LA parents invested in a big old house on the outskirts of town, Elizabeth and Andrew jumped at the chance to all live together once again. And it is on this street that their lives spiraled forward into the future they could have never imagined. In college this crew were a hip band playing all the parties but as years flew by they simmered down to the reality of just playing grown-ups. Elizabeth and Andrew married young, moved down the street and were raising their son, Harry. She focused on her career as a realtor with the patience of a saint, while Andrew focused really really hard on trying to find himself. Having come from a childhood of wealth, he now preferred the bohemian lifestyle (with the money in the bank as a back-up, of course.) Zoe married Jane, the one who lasted more than six months and they were busily running a neighborhood restaurant and raising their gorgeous daughter Ruby. What a fun adventure to follow these vivid, humorous, playful characters through the motions as they try to figure out where the years have gone. How did they actually have teenagers who were smoking, having wild sex and preparing to leave home. How did they, the cool ones, become the parents with rules and restrictions. They had a hit song! They were once the “it” crowd. I thoroughly enjoyed and highly recommend this fabulous beach read, another hit by author @emmastraub! So much fun to get lost in the world of Modern Lovers and simultaneously reflect. How can my kids be starting college, when I just graduated … like yesterday?
Posted by Karen at 7:42 AM