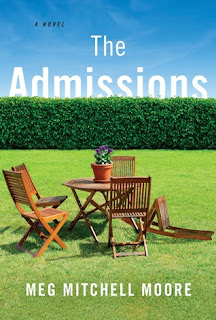 As April 1 (April Fools Day!) approaches, it only means one thing to highschool seniors around the country, college decision time is here. The Admissions, by fabulous author Meg Mitchell Moore, follows the Hawthorne family through this harrowing ordeal. Dad, a successful businessman; Mom, hanging out her real estate shingle and their kids Maya, Cecily and Angela. They seem like an average busy American family living in one of the most competitive expensive areas in the country, northern California. Angela is fiercely fighting for her place as track team star, valedictorian and successful highschool senior while maintaining good daughter, sister and friend status and is at her wits end. As Angela navigates this slippery slope she finds dangerous ways to stay up later, run faster and fight harder, the only thing on her mind is Harvard, Early Decision. Her battle for this position strains the entire family and their perfect picture begins to crumble. If this sounds like an exaggeration or dramatic play on college applications, it most certainly is not. It is an accurate measure of the insanely scary process tempting even the most conservative, protective parents who swear they will never subject their children to this over the top behavior. The possibility of the lottery like effect is too tempting even to the most concerned parents. Absolutely and thoroughly enjoyed this amazing new novel. Hilarious at times and heartening at others, I could not put this fabulous read!
Posted by Karen at 3:15 PM