This enjoyable sequel to The Rosie Project, finds Don and 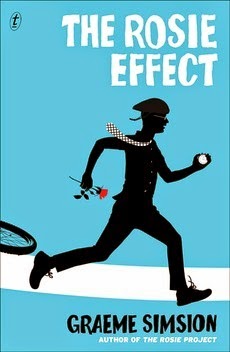 Rosie married, both working at Columbia University in NYC and a baby on the way. With some quirky new additions to the cast of characters, a lot of psychology surrounds the couple as Dons "personality" that is never quite labeled but always charmingly hilarious, finds himself in a heap of trouble. He is consistently honest, straightforward and painfully literal as we repeatedly learn that most people are not... ever. His way appears the correct way as he continually helps his friends and loved ones solve their problems in the simplest most scientific approach which so often works! Dwelling on her complicated past Rosie is not sure Don wants to be a father and she pulls back in a rather uncharacteristic manner while Don is resolved to prove her wrong. They all learn a lot about friendship and loyalty from Don, the one they think needs the help. Fun loving easy read. If you liked The Rosie Project (soon to be a film,) the sequel is a quick must.
Posted by Karen at 8:12 AM