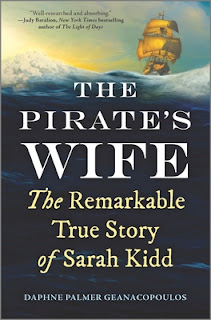 Sarah Bradley was born in England circa 1665. After her mother died, Sarah helped raise her younger brothers while her seafaring father was away. Maturing quickly due to her circumstance, Sarah was married off to William Cox at only 15 years old when the Bradley’s arrived in the New York Colony. Becoming even more self sufficient with natural business acumen Sarah quickly married again after the untimely demise of Cox. When John Oort passed soon after Sarah met Captain William Kidd, a dashing and adventurous man with a reputation that followed him everywhere. As Sarah was already a beautiful and well-to-do woman with multiple businesses and land acquisitions - unheard of for women during this time period - the two became somewhat of a power couple. When the dashing Captain made a privateering arrangement with duplicitous investors their  lives came crumbling down. Completely fascinating account of a period in history that most know little about. The conditions for women, whims of a monarchy and a colony on the cusp of change, this author brings history to life revealing shocking secrets and possible scenarios. Non-fiction that reads like fiction, I did not want it to end. ⭐️⭐️⭐️⭐️