The Map That Leads to You 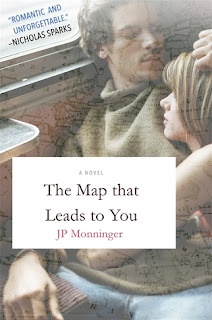 ... And because I loved the recently released Seven Letters, I could not resist reading J.P. Monninger’s novel from 2017!

Heather graduates with honors from Amherst. Before her big corporate job in NYC begins, she decides to backpack Europe with her two best friends Amy and Constance. A trip they painstakingly planned for months, these young women are having their last hurrah before succumbing to the real world of jobs and responsibilities. On a train ride to Amsterdam Heather meets Jack. Not usually the type to easily fall, she is smitten and instantly overcome by Jack’s intelligence, humor and good looks. Originally from a farm in Vermont, Jack is tracing his grandfather’s footsteps detailed in the treasured post war journal that has been handed down to him. As the trip continues Amy unexpectedly departs, leaving Jack and Australian Raef to balance out the group. The young adults test their friendship and leap into their first true love.