Where I Can Breathe 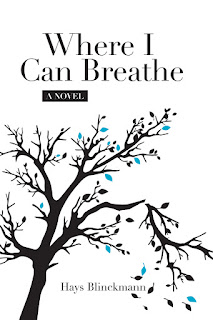 FROM A to Z

Hays Blinckmann is super happy she’s making people cry.  “I know it sounds weird, but I love it. It means people are connecting to this story,” she said, laughing. “I cry when I read it!”

The former Keys Weekly staffer (2015 to 2019) and Key West resident just published her second novel, “Where I Can Breathe,” on Amazon. It’s available in paperback or for Kindle. The positive feedback from readers is feeding a happy “high” as she rides the wave of another success. In fact, she’s already at work on her third novel. Her first, “In the Salt,” was published in 2015.

The Keys Weekly had the opportunity to read the book, and then sit down with the author and former colleague. We had questions. So. Many. Questions.

Do your first and second novels have similar themes? They’re both “dramedies” (dramatic comedy) about family — children and parents. And they’re both about the struggles of a family trying to stay together in the midst of alcoholism. Both feature large personalities and adversity. The difference is that “Salt” was an angry look at the family’s circumstance. “Where I Can Breathe” is much more compassionate and understanding.

You’re getting this question a lot, so we’ll go ahead and get it out of the way. How much is autobiographical? The only true-life part is that my late mother was an alcoholic who entered hospice. And the character of Agnes is based on my mother. My mother did grow up in the last half of the century, she was part of that generation that was lost between being housewives and feminists. She did her best to chart the new world as a young mother, in a time when things were constantly changing. I think they started their lives out with big dreams but things got in the way  — marriage, children, horrible events.

Was the second novel easier to write? Writing for the Keys Weekly for four years was like getting up every morning and going to the gym. Then, when it was time to run the marathon, I was ready. I don’t want to say it was easier, but it was better. One thing I want to say is that when writing for the paper, I learned to write for other people. It wasn’t self-serving. In writing the second novel, I made the same adaptation; I was focusing on the subject and the end reader.

For such a serious subject, there’s a lot of humor in this book. I grew up with a very good sense of sarcasm; there were high levels of that in my home, as well as comedy. It’s the way we dealt with our issues and I rely on sarcasm and humor to get me through horrible situations. It was so much fun writing these characters, and this dialogue.

Who is your favorite character in “Where I Can Breathe”? Ansel. He’s just very large, and passionate, and angry and wears his heart on his sleeve. (His sister Abby and big brother Arthur have to be more metered. She’s a mom, he’s a businessman.) But Ansel is all over the place until Hector, his love interest, pulls him together.  I love Hector, the Cuban American doctor from Miami. A lot of people love that character. Ansel is the youngest in the story, and has the hardest time finding love.

How long did it take you to write “Where I Can Breathe”? Well, I thought about it for two months, and then it took 10 weeks to write. I knew the ending and the beginning, I just had to fill in the middle. So a lot of the events were unscripted until I actually sat down to write it. I just had to answer the biggest question: How did this beautiful woman who seemingly had everything – wealth and family – choose to end her life on the most tragic note possible? How do you get from A to Z?

Can you describe a good writing day? I’m a mom. I’m a wife. I chauffeur to soccer practice. I have lunchboxes to make. So I wait until the kids go to school and my husband goes to work. I tried to put in four or five hours a day. On a good day, I would get 6,000 words. The funny thing is that sometimes it wasn’t like that. There would be a bunch of screaming, 10-year-old boys in the house and my husband using the chop saw outside. But if you’re really writing, and really dedicated, you do it.

I thought the parts about Agnes’ and Asher’s early life in New York City were really evocative. What was the inspiration? I drew on my grandfather’s annual New Year’s Eve party for his business associates. It was about breeding and education. And Agnes and Asher came at it from a disadvantage – trying to assimilate into the upper city echelon although they came from rural suburbia. It was a way to describe Asher’s drive by contrasting it with these socialites, that maybe didn’t have the same drive because they grew up so privileged. And Asher needed a wife that would play along. Plus, back in the ’70s, everyone wanted to be a tycoon. It was the American dream.

What’s the most satisfying part of this book? I think that readers start out wanting to hate some of the characters in “Where I Can Breathe,” but by the end, they couldn’t. And I didn’t want the readers to hate the characters. We’re human, though, so we want to see things in black and white – you want the villain and the good guy. But, listen, parents do horrible things, children do horrible things and the truth is somewhere in the middle where it’s murky. I love that the readers are responding to that natural sense of confusion and love and raw emotion that the family has for each other. Oh, and also that reviewer who wrote “This is not chick lit.” I love that.