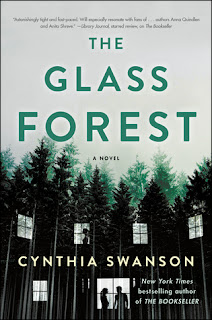 Angie Glass is living a quiet simple life in her small Wisconsin town. She comes from a large family and has lived there her entire life. Just twenty one years old, Angie has a baby and is newly married to Paul, a stranger she met last summer with Hollywood good looks who arrived with little more than a bag and a charming smile. When the phone rings one day in their small house in the woods, their lives are changed forever. Paul’s niece Ruby has called to inform them that her father, Paul’s brother is dead and her mother, Silja, has disappeared. Angie insists she and the baby accompany Paul to upstate New York to help Ruby and find out what has really happened to Henry. From the moment they arrive in the house that is literally made of glass, every step Paul makes leaves Angie questioning who her husband really is. Ruby seems standoffish and Angie can’t discern whether she is shy or hiding something. With each passing days the clues become more sinister. It is hard to tell in this complicated family if anyone is ever telling the truth. Flashing back through Silja’s young life, Henry’s controlling ways had left her desperate and afraid. This twisted, creepy, literary thriller is filled with a cast of characters so quietly deceptive even they start to believe their own lies. Highly recommend this well written, suspenseful novel. You will not be able to put it down (or walk in the forest alone.)
Posted by Karen at 3:41 PM