Hum If You Don't Know the Words 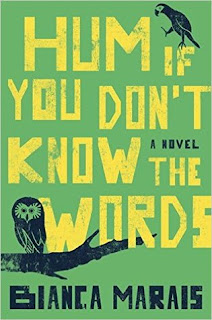 Robin is a nine year old girl, living in Johannesburg, South Africa. It is 1976 and Robin sees the world through a typical child’s eyes, a white child growing up during the apartheid. She pretty much cares about her bike, spying on the neighborhood boys and her imaginary friend named Cat. When tragedy strikes and her parents are violently murdered Robin goes to live with her Aunt Edith, a feisty single woman who is a stewardess. Since Edith travels much of the time she hires Beauty to watch over and care for her niece. Beauty is a black schoolteacher that has left her peaceful village in search of her missing daughter Nomsa. It is believed that Nomsa, an intelligent, outspoken teenager has joined a military movement to fight for freedom. As Nelson Mandela sits in jail, the violence builds in South Africa and everyone’s life, both black and white is destined to change forever. Robin and Beauty create an unexpected friendship beyond that of a typical caretaker. Robin’s childlike innocence does not always match her actions as she learns about love, trust and family where color has no place. As Beauty searches for her own daughter she helps Robin heal and is probably the first person to always tell her the truth. This book is a beautifully written story during a time in history that was not very beautiful. It is sad that we still struggle today to see that beyond our differences we are bound together as one and should respect each other and this planet we call home.
Posted by Karen at 3:09 PM