Anil is the eldest son in a large Indian family. 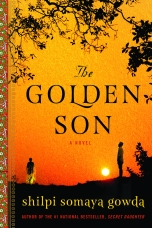 They live in a rural farming village far from any big city. Few children in their village finish much schooling but Anil is the very first to attend college and then his life’s dream, medical school. While his brothers work the land with their father Anil is determined to finish school and ultimately attend a prestigious medical residency in Texas. Scared and anxious Anil travels across the world to begin his training in an extremely competitive, difficult program where he is easily cast as the odd man out.  Anil finds adjusting to the various American ways and language as difficult as the residency itself. Anil’s father becomes ill and it falls on his shoulders to mediate the towns disputes and decisions pertinent to the family business, much to the brothers dismay, as they are the ones performing the difficult work and he is far away living the golden son life. This beautiful family is torn apart by traditions that do not easily fit into modern life. Their strong respect and love for each other and their father’s memory keeps them from giving up on this difficult road where two world’s collide and Anil is torn between his dreams and responsibilities, wondering if he can ever have them both. The Golden Son is beautifully written with an incredible cast of characters. Author Shilpi Somaya Gowda, who also wrote the best selling novel The Secret Daughter, captures our hearts again as well as our imagination with this wonderful story that I did not want to end. And that’s the difference fellow readers, to find the books that you cherish every final page and do not want it to end! Highly recommend!!