Bringing Down the Duke 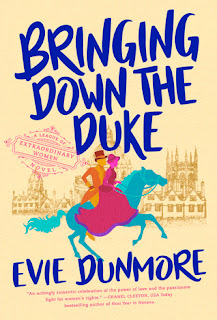 Miss Annabelle Archer, country girl, daughter of a vicar is an orphan. She lives with her miserable cousin Gilbert and helps cares for his five children. As brilliant and fiercely independent as she is - women are not permitted to live alone nor determine their own destiny in 1879 England. Annabelle, completely overeducated by her father finds a place at Oxford alongside one of the very first group of women allowed to study there. She manipulates a scholarship in return for volunteering with the women’s suffrage group, protesting the women’s marital possession act and right to vote. Annabelle manages to infiltrate the highest political influencers by coercing an invitation to the Duke of Montgomery’s ball. A beautiful bluestocking, Annabelle raises quite a few eyebrows. She cares not for a suitor as much as someones ear to affect the parliament. Annabelle is shocked to find herself completely enthralled with the duke himself for she has never imagined a man existed with both dueling wits and breathtaking charm as Sebastian Devereux. This historical romance novel is filled with passion and perseverance, a wonderful read and superb debut by author Evie Dunmore. Lucky for us a sequel is in the works!